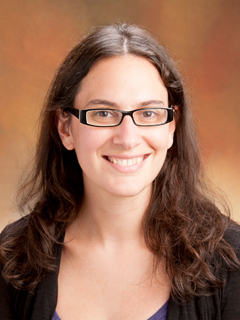 Dr. Dowshen focuses on improving the health outcomes for adolescent and young adults (AYA) living with or at high risk for contracting HIV/AIDS and improving access and quality of care for gender expansive and transgender children and adolescents. She is particularly interested in developing and testing digital health interventions to reach, engage, and retain AYA in care.

Nadia Dowshen, MD, MSHP, AAHIVS, is a pediatrician and adolescent medicine specialist and serves as director of Adolescent HIV Services and is co-founder and medical director of the Gender and Sexuality Development Clinic in the Craig Dalsimer Division of Adolescent Medicine at Children’s Hospital of Philadelphia. Dr. Dowshen also provides medical care at Covenant House, a youth shelter in Philadelphia and general inpatient adolescent care. She is a faculty member in CHOP’s PolicyLab and serves as co-chair of the CHOP mHealth Research Affinity Group. She is also an assistant professor of Pediatrics at the Perelman School of Medicine at the University of Pennsylvania.

Dr. Dowshen’s research focuses on developing youth-friendly technology-based interventions to improve adherence to medication and engagement care among young men who have sex with men and young transgender women of color who are living with or at risk for HIV infection. She is interested more broadly in health equity for other marginalized youth including LGBT and homeless adolescents and in particular focuses on improving quality of care and access to care for gender diverse and transgender children and adolescents.

Dr. Dowshen received the 2010 Society for Adolescent Health and Medicine New Investigator Award for her research identifying protective factors against HIV infection among transgender youth. She was named an NIH Adolescent Trials Network (ATN) Scholar, a Best Young Investigator by the National Centers for AIDS Research (CFAR), and was a Community Scholar-in-Residence at the University of Pennsylvania. Dr. Dowshen served on the Board of Directors of the Sexual Information and Education Council of the United States (SIECUS) and currently serves on the executive board of the Alice Paul Center for Research on Gender, Sexuality and Women and the Penn Program on Gender, Sexuality and Women’s Studies at Penn.

Society for Adolescent Health and Medicine, 2008-

PAX/The Center to Prevent Youth Violence, Board of Directors, 2010-2011

Importance of Improving Insurance Coverage for Transgender and Gender-Expansive Youth